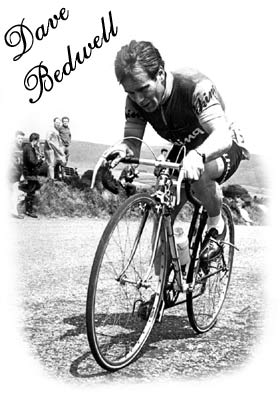 1e in Tour of the Cotswolds, (Shipston on Stour), Gloucester (Gloucestershire), Groot-Brittannië
1961
1961

Our group, comprising Dave
Bedwell, Tony Phillips, Roy Coxon, Brian Robinson, and myself belonged
initially to the Romford Wheelers and we became very frustrated with the
restrictions put on us by the N.C.U. so we all decided to form our own club
and affiliate under the British League Of Racing Cyclists(B.L.R.C.) this
would be about 1949/50. This caused quite a problem in the Romford Wheelers
as Tony Phillips father was President of that club and we comprised the
racing section.

Dave was listed in publications as a cycle mechanic but I don't think he
ever practiced at that as he would ride all day and we would meet him in the
evening at a cafe called the Green Tiles where he would be eating his
"training food" of steak and meringues,we would then go for a training ride.
As you know Dave was not very tall and as his frame top tube and down tube
met at the head tube the frame was still a little large, so to compensate he
would take his crank set and cut the crank arms in two and re-weld them to 6
1/8 long (156 mm ) Also he had a form made up so that he could take a B.17
narrow saddle and reshape narrower still, he did all our groups saddles like this.

Dave had a brother named Charlie who was much taller than he and was a
cyclist also,they both lived at home with their parents in Romford, the
whole house was given over to cycling as his parents rode also,they had made
the rear downstairs room into a weight room and Dave had built a leg press
in there. Before I went into the R.A.F. we were pressing 400 pounds after I
came out they told me that they were up to 1000 pounds.

In 1950 Dave won the "Grand Prix de l'Humanite in France a communist
sponsored event. In that same year he was doing under the hour for a 25 mile
time trial when George Fell held the record at 59 minutes something in the
N.C.U.
Jack Julian 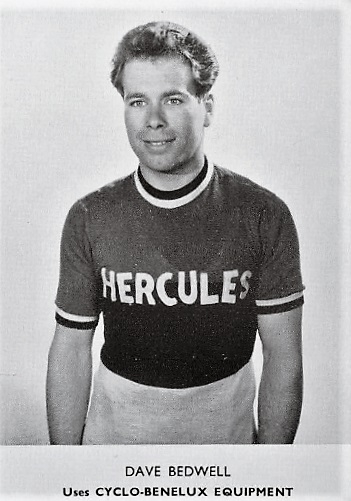