Marco Chagas was one of the gratest portuguese riders ever and, actually, holds the record of winnings in Volta a Portugal with four wins.

Marco Chagas' career was marked by the absence of portuguese professional teams. In those times, in the main portuguses races could be seen the best amateur teams of Portugal and the ex-professional teams. Marco Chagas started racing with professionals in 1976 but he only rode for one of the "semi-pro" teams in 1979, Lousã-Trinaranjus. After his good performances the years before, in 1979 Chagas won Volta a Portugal, but was later disqualified because of doping use. Later, he stated that was innocence.

In 1984, Chagas signed for Sporting, the team of his friend and idol, Agostinho. Sporting was the first portuguese team in 8 years to became professional, and had an ambitious programme to ride outside Portugal, including the Tour de France. Sadly, Agostinho died in May, after a fall while leading Volta ao Algarve. Tour de France's organization kept the invitation, rending a tribute to the best portuguese rider ever but, without their capitain, going abroad wasn't possible. Marco Chagas won again Volta in 1984, but was disqualified after another positive control for ephedrine, altough he claimed to be innocent. Winning again in 1985 and 1986 (still for Sporting), Chagas' decline started in 1987, when, after winning another Volta, was disqualified again because od doping charges. In 1988 and 1989, Chagas rode for Louletano and, in 1990 for the small Orima, but his results never became the same and he retired.
In 1991, he became Tensai's coach, changing, in 1993, for Sicasal, where he remained till 1995. Since 1997, he became the official RTP's Volta a Portugal commentator.
António Correia 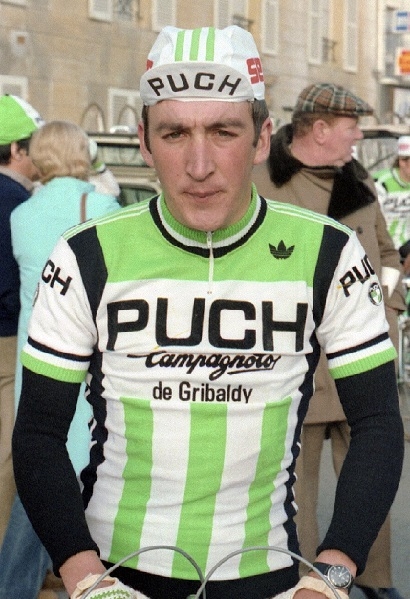